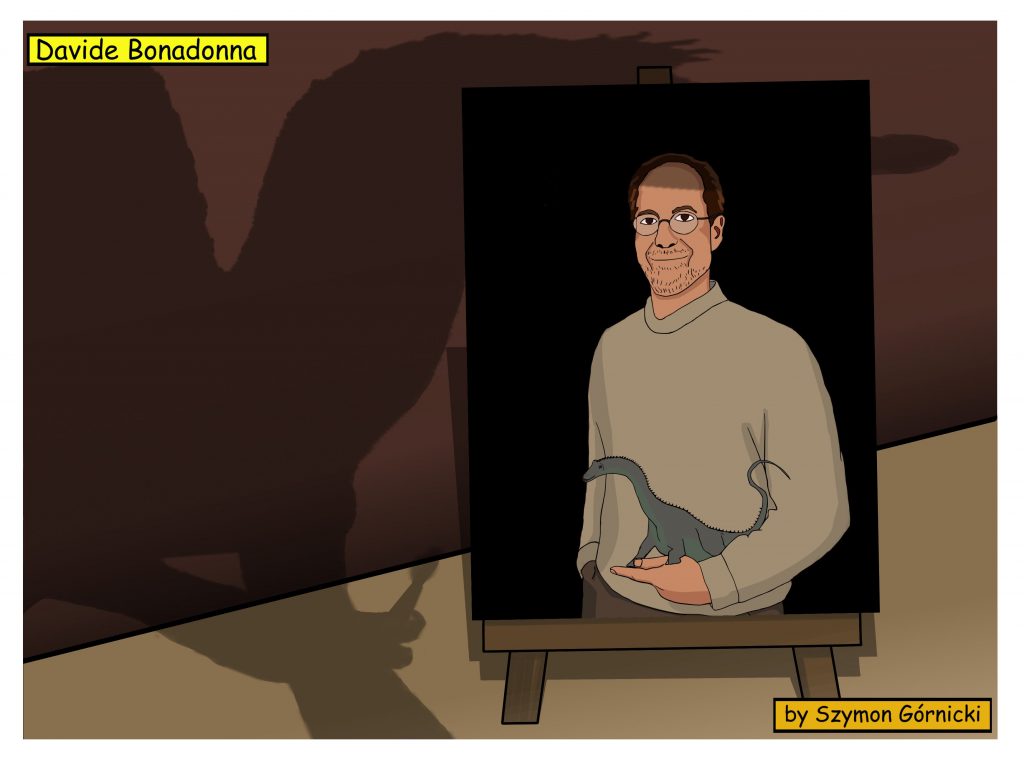 Italian illustrator and sculptor. Creator of a realistic paleoart, cooperates with well-known paleontologists, such as Paul Sereno and Andrea Cau. His works are displayed in museums, theme parks and exhibits, and have appeared in National Geographic, Focus Junior  and Prehistoric Time mag. Davide Bonadonna is also laureate of prestigious international awards such as e.g.. The Lanzendorf PaleoArt Prize.

Szymon Górnicki: What is your favorite dinosaur?

Davide Bonadonna: To be honest I donʼt have any particular preference. I use to enjoy “the nextone”, if the final rendering seems to be promising, if I see Iʼm making a good job.

SG: How did your adventure with paleoart began?

DB: It was quite traumatic. I was commissioned in 2005 to illustrate a DeAgostini publisher book about dinosaurs and prehistoric creatures. My very first experience on this kind of subjects, I was unprepared. So I tried to read up and do iconographic research. I was quite satisfied about the final print, very proud of it, but after a while I read bad comments about my work in a specialized blog. “Good illustrations, but surely not able to draw dinosaurs”… Not cheering at all. So I got upset on one side, but on the other I decided to try to understand why such kind of considerations were made. So I got in touch with the blog administrator who very kindly explained me what paleoart is and how to deal with it. If I had the chance to evolve my skills in the proper way I have to thank Fabio Manucci (he was just 17 in 2006). Simone Maganuco completed my apprentice the following year.

SG: Whom do you admire the most in art and in paleontology?

DB: I use to admire all artists who give me emotions, move my feelings, with no distinction of style or period. It can be the unknown Egiptyan sculptor who modelled the Nefertiti bust, or Caravaggio paintings. Talking about paleontology I consider Zdenek Burian and Doug Henderson the highest and probably the unreachable edge of paleoart. But I love any kind of artistic expression if well conceived and faithful to paleoartistic reconstruction principles.

SG:  What are the key characteristics of a good paleoillustration?

DB: Paleoart must explain you how an ancient organism or environment probably was, up to the most recent scientific conclusions. Has a serious educational task and purpose. Must be honest and sincere with the public. I hate who does not make any serious research and writes “scientifically accurate” on evident superficial and unqualified reconstructions. Itʼs an intellectual scam. The keys are previous resarch and scientific supervision of a competent paleontologist.

SG: On the blog Theropoda (http://theropoda.blogspot.com/) we can read that you prefer to define yourself as an illustrator, not as a paleoartist. Therefore, I would like to know what is your view on the narrow specialization of some artists and paleontologists in paleoart?

DB: I consider myself more artisan than artist, even if I actually know how to move myself in this field. I use to follow my supervisor indications without many questions, I do what he asks. Itʼs a job for me, so I donʼt give much room to my desires but try to adapt my feelings to the needed. Specialization is so useful to obtain the best result as possible. You as a scientist need someone who can interpret your data as you want, with no need to explain everything from the beginning. Illustrator (or sculptor) can take advice of the scientist. He knows anatomy and specific features of the character heʼs painting.

DB: I was so happy to be involved in such a project! Simone Maganuco of course already told me there were many news about the team conclusions. There was a big problem to solve about posture: legs were to be so short in the new model that Spinosaurus seemed not to be able to stand bipedal. So it was very exciting to try to find a way to solve this riddle. Which is not solved at all, of course, but l enjoyed it.

SG: What do you think, what could be changed among paleontologists and paleoartists?

SG: You wrote on your website (http://www.davidebonadonna.it/) that one of your hobbies are comics. What do you appreciate most in comics? What impact had this form of graphics had on you, and have you ever created your own comic?

DB: Iʼve always read comics since when I was a child. In the last years they finally have become an upgraded art here in Italy too. I have quite a good collection, even if actually I donʼt have much time to cultivate this passion. Iʼd like to go to dedicated festivals and follow the new productions, but I have a family and not much money for this hobby. I love comicsʼ graphic sinthesis. I tried to work on some stories when I was at school, but you need so much practice to succeed and I was not so good. I preferred to dedicate my efforts to naturalistic and medical illustrations.

SG: If illustration didnʼt exist, whom would you have been instead?

DB: Before becoming an illustrator I tried to study biology at the university of Milano, three years. I wanted to become a, ethologist or a genetist. But I was not a good student, so now Iʼd probably be a frustrated biologist.

SG: Have you ever been to Poland? What do you associate with Poland?

DB: If I had to answer you without thinking, I instinctively associate Poland with Second World War, Karol Woytila, Frederic Chopin, the Winged Hussars (!!!). And my Facebook friend Jacek! (Jacek Major – Polish paleoartist).

Talking seriously, Iʼd like to have the chance to come and visit Poland: in my mind there is Warsaw, Kracov, the Bialowieza forest and all the great thematic Prehistoric Parks built tere.

I would  like to thank to Davide Bonadonna for the interview and to you for reading.