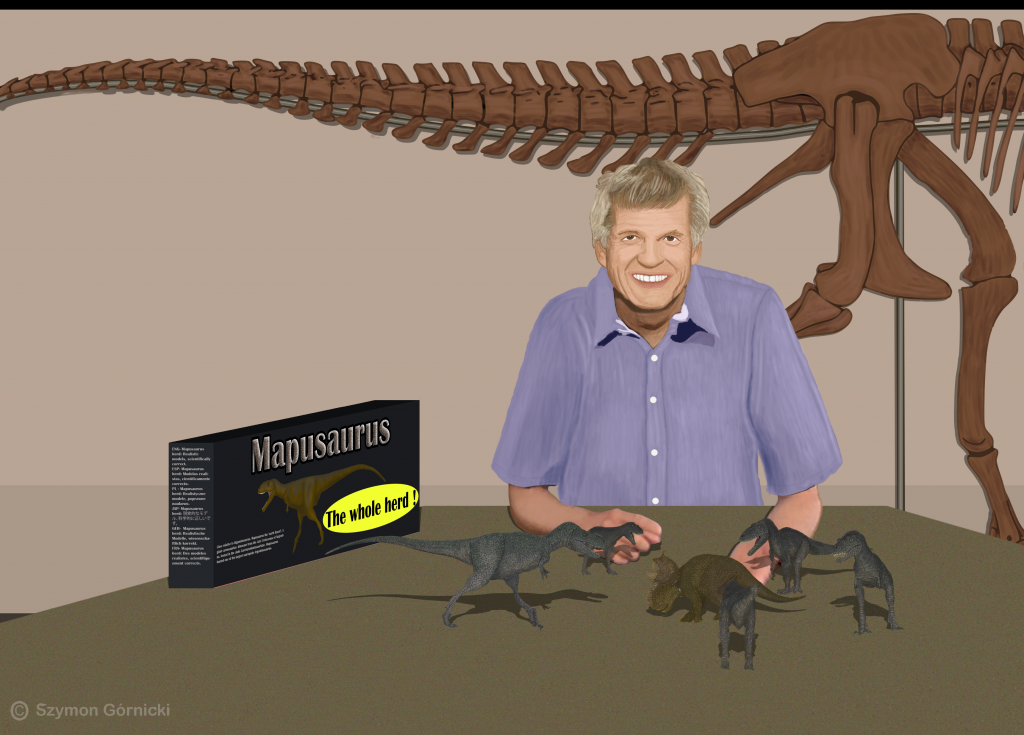 World famous Canadian paleontologist, Professor of the University of Alberta. He specializes in dinosaurs, focusing on the issues of growth and variability, the anatomy and relationships of carnivorous dinosaurs, and the origin of birds. His long-term goal is to understand the rich Cretaceous ecosystems of the Dinosaur Provincial Park (Canada) and the Nemegt Formation (Mongolia). Together with co-workers he named twenty-five new dinosaurs, including the species Mapusaurus Roseau.

Szymon Górnicki: Who is your greatest authority in life?

Philip Currie: There are many people whose opinions I respect, and even find that in many cases they are right. However, nobody is correct all the time, so one always has to be critical and look at more than one viewpoint (even ones own viewpoint).

SG: What do you consider your greatest achievement in scientific career?

PC: Similarly, there is no single ‘greatest achievement in scientific career’. I have been very lucky to have made some fantastic discoveries that will have people going back to look at specimens in collections, or to re-evaluate my papers. The biggest impacts seem to have been in relation to the feathered dinosaurs. However, when I discovered the bird footprints in the Peace River Canyon in 1979, or the embryonic hadrosaurs in Devil’s Coulee in 1987, or the baby ceratopsian skeleton in 2010, I was incredibly excited every time. I suppose the greatest satisfaction is when you predict that something should be found in a particular place, and then you go out and find it.

SG: What is your favorite dinosaur?

PC: My favourite dinosaur is whatever I am woking on at the time, although I seem to have a predisposition towards Troodon. It is amongst the oldest dinosaurs known (having been described first in 1854), has the relatively largest brain known for a dinosaur, has stereoscopic vision, was probably warm-blooded with feathers, and is still surrounded in mystery because no complete specimen has ever been found in Alberta.

SG: How was your idea of large carnivorous dinosaurs hunting in packs born?

PC: For many years I have worked in mass-death ceratopsian and hadrosaur bonebeds and came to believe that the evidence strongly favours these and other dinosaurs as herding animals. But if you know anything about modern ecology, then you are familiar with the idea that herding herbivores mass together in part as a way to protect themselves against carnivores. Carnivores respond by evolving their own gregarious behaviour (as in wolves and lions) so that they can break up those herds and thereby capture prey so they can eat and survive. I was therefore not surprised when in 1987 we re-discovered Barnum Brown’s Albertosaurus bonebed in Alberta, and had strong evidence that tyrannosaurs probably also formed packs for hunting. Coincidently, we were finding evidence in Mongolia at the same time that the carcharodontosaurid Mapusaurus was a pack hunter.

SG: If paleontology didn’t exist,  who would you have been instead?

PC: If I had not been a palaeontologist, it is impossible to know what I would have done instead. I really like the thrill of travel and exploration, and the challenge of solving mysteries, so I probably still would have ended up being a field scientist.

SG: Many paleontology fans know you from popular science programs, can you describe how working in such programs looks like?

PC: Because Roy Chapman Andrews had a tremendous impact on my decision to become a dinosaur palaeontologist (because he was a tremendous champion of Science), I have always felt that it is important to let the general public (especially children) know how exciting and rewarding it is to be a field scientist making discoveries in field, lab and research. For me it comes naturally, although I know this is not true for everyone.

SG: What are your favorite dinosaur movies?

PC: Some of my favourite movies include the original King Kong, the Hammer Films remake of One Million Years BC (with the Harryhausen animation) and of course the original Jurassic Park. All of these, of course, represent milestones in the animation of dinosaurs (bringing them to life to new generations of audiences).

SG: You have been to Poland, you worked with Polish colleagues. What do you think is distinctive about Poland, Polish people?

PC: Having been to Poland three times, one can’t help but admire the indomitable Polish spirit and industriousness. I was lucky to meet Zofia Kielan-Jaworowska in 1981, and kept in touch with both her and Halszka Osmolska over the years. One of my greatest honours was when Zofia, her daughter and granddaughter came on one of our expeditions into the Gobi desert. I also had the privilege of having Tomasz Jerzykiewicz working with us on the Canada-China Dinosaur Project (in the Chinese Gobi Desert).

SG: How would you describe Canada in two sentences ?

PC: It is impossible to describe Canada in two sentences unless they are very long sentences with no punctuation. Quite simply, it is my home, and I love it. The more I travel, the more strongly I feel about it.

SG: What would you like to tell young paleontology enthusiasts?

PC: Young palaeontological enthusiasts should always keep in mind that we know very little about dinosaurs and that there is always going to be room for new, exciting research. And if you want to become a palaeontologist, just do it.

I would like to thank to Philip Currie for the interview and to you for reading.